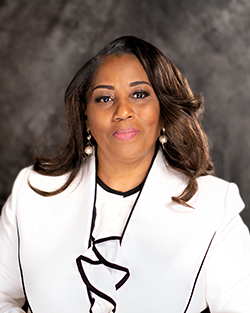 Janice Morris is a native of New Orleans, Louisiana. But later moved to the great state of Georgia in 1988. She has been a proud Rockdale County resident and homeowner for over 20 years alongside her husband of 22 years. Morris received her Bachelor of Science in Computer Science from the University of New Orleans and a non-profit certification from UGA’s Terry Collins Foundation.

Prior to being elected to the office as Clerk of Courts, Morris has shown her dedication, dependability, and commitment to the citizens of Rockdale County. Since 2000, Morris has served as Chief Operational Officer (COO), of a successful 501(c3) nonprofit organization, Helping Hands Outreach Clinic, in which she co-founded with her husband. While in this role, she held management and budget experience with the oversight of a large operating budget.

With a primary focus of being Approachable, Accessible and Accountable, Morris will lead the Clerk’s Office with the “People’s Agenda” goals of maintaining a balanced budget, the assurance of policy and procedures being properly regulated by the Clerk of Courts, her commitment to having the best stellar customer service and updated software. But most importantly, encouraging citizens to be more involved in local government and the services rendered within the Rockdale County Clerk of Superior and State Courts.